In 1889, a treaty was signed between the native Americans and the United States government opening the land north of the Niobrara river for settlement. President Harrison declared the territory open in February of 1890.

In 1891, R. R. Naper moved to a homestead and built a house one-quarter mile south of the present townsite of Naper. He stocked a small supply of general merchandise but it didn't take long for him to realize he should have located on the Old Rosebud Trail. In 1892, he moved his store to the southeast corner of what is now Main Street (most recently the location of Naper Supply and Repair).

Mr. Naper and George Hotaling (who had homesteaded in 1890) each relinquished 40 acres of their homesteads for the townsite. The town was then platted for the first time . It was not until March 23, 1897, that the Boyd County supervisors passed a resolution that Naper be incorporated.

Isaac Mills built a blacksmith shop opposite Mr. Naper's store. The next year, J. W. Small built a hardware store and G. S. Graves built a hotel. As more settlers moved to the area, the need for a school was recognized. District #21 was organized in 1892. Mr. Naper filed an application for a post office July 9, 1892. George R. Crosby was appointed postmaster March 5, 1894. David Briggs homesteaded and built his first livery barn in 1896. As his business grew, he built a larger barn on the north side of what is now Second Street, just east of Main Street, near the present site of Tim Whitley's car wash.

In 1902, the People's Bank was established by Wilford Standiford with J. A. Standiford as cashier. Later the First National Bank and the Farmer's State Bank were established. Sam Statsman operated a hardware store from 1902-1920 with his partner Carl Reichel and his father-in-law John Stahlecker . They had purchased the hardware store from Solomon Blakkolb when Solomon opened a general merchandise store. The Blakkolb family continued to operate this same store until 1968 when Solomon's grandson Bill Blakkolb sold it and retired.

The Naper Press was the first newspaper followed by the Naper News, the Boyd County Democrat and the Naper Enterprise. Hensel and Brown were publishers and bookmakers. (Some of their work has been reproduced in the Naper Paper.)

By this time, Anna Walter operated a beauty shop and Miss Kelly was a dressmaker. A. M. Schaefer and A. A. Gregg owned restaurants. Every growing town needs an attorney and Naper had R. L. Crosby and Paul Hazen. Josephine Rinehart and Mrs. Bill Wright operated hotels. Peter Andersen traveled with a team and buggy selling Raleigh products.

Dr. Mallory and Dr. Reeves were the first doctors to serve this area. They were located at "The Point." Dr. Crose, a dentist, came from Butte to serve the Naper area. Dr. Charles Zimmerman was a pioneer doctor in Naper for about 30 years. For 27 of those years, he was contracted by the United States government to treat the Indians. He and his wife Mollie operated the drug store. Dr. George Frazier, a Santee Sioux, practiced in Naper from 1904-1914. Dr. E. R. Seasongood served the community and had a small hospital on the east side of Main Street from 1910-1920. After he died of the flu, his brother Dr. R. R. Seasongood took over the practice until 1932. 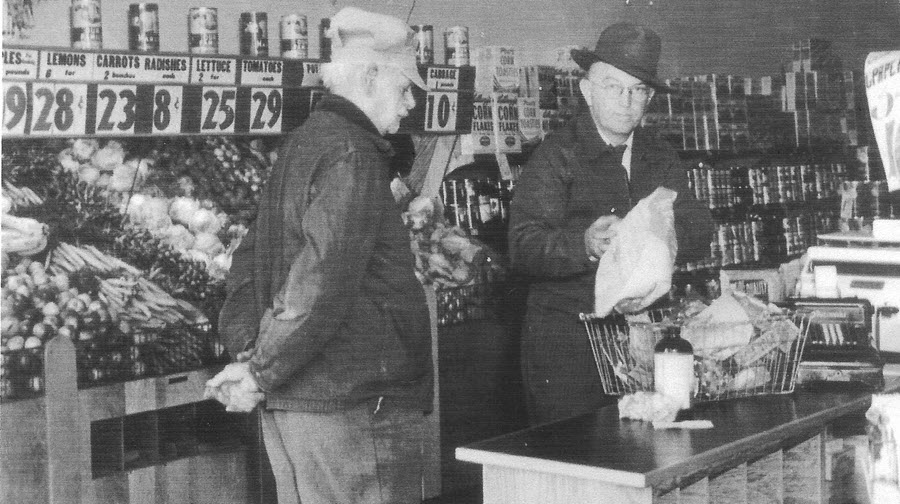 The Bruce Roller Mill was located three miles east of the bridge southwest of Naper on the Keya Paha River. John Hoyt moved his sawmill to the Henry Tienken place to saw the lumber for Henry's buildings. There was a flour mill on Oak Creek west of Tom Wilson's home and another west of Bill Tienken's place.

Cattle, hogs and other livestock to be sold were driven or hauled by team and wagon to the railroad at Stuart, St. Charles or Herrick. Supplies were brought from the nearest railroad depot by freighters M. A. Borrall, Ferdinand Klaudt and Henry Schock.

The Twin Buttes are prominent landmarks five miles east of Naper on Highway 12. They are easily seen as they rise 200 feet above the surrounding countryside. One of the buttes has a cave where outlaws were said to have hidden. Indian dances were held on the flat-topped butte.

For many years, an annual three-day tournament was held. Horseracing on a track just west of the former Zink Veterinary Clinic, baseball and other games entertained the attendees. Often there were exhibition dances by Indians in full dress. They would camp north of town during the celebration.

At one time Naper had two merry-go-rounds, one of which was operated by a team engine. They were stored in the livery barn or in Krotter's building and brought out each year during the tournament.
Silent movies were shown in the town hall with Frieda Statsman Blakkolb providing background music on the piano. Free movies were sometimes shown on the side of the building just west of the present Post Office. Movie goers brought their own chairs or blankets and sat along the street to watch.

Early settlers used candles or kerosene lamps. At one time Naper had carbide lights. The carbide tank was kept in a cave so it wouldn't freeze but one day it blew up and that was the end of Naper's carbide lights! A "light plant" (generator) was installed and operated at certain times during the day. Usually in the evening the plant was started and ran until about 10 pm. Five or ten minutes before it was to be turned off, the operator blinked the lights as a warning. On Wednesday and Saturday nights ("town nights"), the plant was operated later since the stores stayed open longer. In 1949, Niobrara Valley Electric Membership Corporation brought electricity to Naper. Bill Blakkolb was one of the first directors.

Early residents carried water from one of several wells in town. In 1902 a windmill was constructed on the south end of Main Street. Wells had to be dug by hand until Charlie Bennett brought the first well¬digging rig into the area. Soon a few groups of neighbors worked together to develop water systems and pipe water to their homes. In 1955, the Naper Improvement Corporation was organized with 25 citizens buying shares to finance a water system. A well 110 feet deep was dug west of town and pipelines were laid. In 1990, the town assumed ownership of the water system. A sewer system with a lagoon-type disposal was installed in 1971.

Information from A Continuing History of Naper, 1992.